The ironic life of a doubt..I mean SCOUT leader...

~"“Irony is the jesting behind hidden gravity”~"
John Weiss 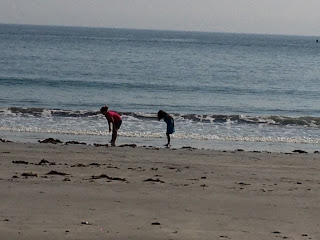 When I was seven years old,  I did some time I was very briefly involved in Girls Scouts.  I don't really remember too much about the experience. I do know that we did a few crafts (which I hated) and that something may have occurred while we were making Christmas ornaments, with pins and glue...and perhaps I may have angrily catapulted..thrown  gently tossed an ornament or six across the room. I don't really want to remember. I just know that soon after, I was thrown out it was suggested that I no longer participate.That perhaps a group of quiet girls doing quiet girl things wasn't the place for me. That maybe I would be better off in prison sports. So, I think it is kind of ironic that this year I found myself being the co-leader to a pack of ...Girl Scouts. A person responsible for the education and well being of a group of girls- for two and a half hours every other week Not only did I volunteer-but I also paid for the privilege of doing so. Yes, I paid  money to do this.


Do you ever have days where you say to yourself "What the hell was I thinking?"  Yeah well, I had many of those this year- mostly on alternating Wednesday nights between the hours of 5:30 and 7:00 p.m. Do you have any idea of what it is like to walk into a room where seven little girls are eagerly waiting for you-all shiny eyed- full of hope and expectation? Where they actually expect you not only to have an activity planned-but a cool and fun activity!  A cool and fun activity that will stretch their imaginations, make them think, get them excited about all that they can do in the world. It's terrifying.

Let me start by saying that these are great kids. I really enjoy them all. This was the reason I was coerced volunteered in the first place. My co-leader and I  had so many good ideas-plans even!  We were going to give these girls a GREAT year! The problem is that- we (-my co-leader and I), are way better leaders in our heads than in the here and now world. Especially compared to the leaders from other towns. Some of those leaders actually wear uniforms! They have REAL Girl Scout vests-with pins and even badges-all  sewn on..by hand!   I showed up dressed. Sometimes my hair was brushed. I was a definite failure in Scout fashion..I couldn't sew a badge to save my life-much less wear one! Maybe I would have learned if I hadn't been asked to leave brownies.  Besides, I don't look good in green vests..Or really- anything polyester...But regardless of my lack of scout couture,  I think that our girls had a good year.  We had fun.  We played a lot..did a few field trips..we even made ornaments at Christmas!  Not to toot my own (and co-leaders) horn-but I'm proud to say that none of those ornaments wound up being thrown across the room. That works for me..Still..not wanting to tempt fate..and tired of being a "Scout fashion don't"-I resigned my leadership position for next fall...Those girls deserve a more involved leader-or at least one who knows how to sew..

It has been a year of ironies for me. If any of you read last weeks post-you know that we had an IEP meeting today. On Wednesday, I was told by someone with some authority "I don't really have cause to believe she has any kind of autism." Inadvertently leading us to believe that she was going to lose her IEP. Which is something you just don't want to hear two days before her meeting-especially when you see how much she has and continues to- struggle. It's funny..When I look back three years or so-to when she was first diagnosed..I said those very same words. We had already gone through the diagnosis of two (very different from each other) boys. I had thought I had seen it all-knew it all. In fact, I was SO SURE that I was right-that it took the input of three speech therapists, three occupational therapists, two educational specialists and a neurologist to finally accept what I wasn't open to. As my dad used to say "A kick in the ass is a kick forward..I guess I got nine.  I am not going to go into the details of how I felt about this-or my idea that I had somehow let my daughter down. I will just say that-we accepted(finally) the diagnosis-and have done our best to get her everything that she needs. As a parent,(and especially this week) I have to say this.  We do not WANT our daughter to be autistic, have autism, be on the spectrum or whatever you want to call it.  Like it or not-SHE IS.  It is not our purpose, our dream or our mission in life to prove this to anyone. We are not so enamored with this neurological difference that we consider it a "must have" for any of our kids.  It is what it is. Whether or not one chooses to accept that is on them.  Not our daughter. I just needed to make that clear to anyone who.. you know...may be thinking that way.  Regardless, we had her meeting and we got her the services that she needs for the next three years. We are relieved. Especially as she is getting older and academics and socialization will become more entwined. Early intervention is EVERYTHING. I am so very thankful for everyone who rallied behind her today. My girl is going to get what she needs. Which is the whole point-isn't it?

I had intended this post to be a light hearted piece about my adventures in Girl Scouts this year..I didn't mean for it to get so serious at the end. But there you go. Ironic isn't it?   Only two more scout meetings to go...

Labels: Scouts kicked out of scouts. ornaments bebadged leaders IEP authority figures odd thoughts people have when you challenge getting your childs needs met it's been a long week I deserve a drink

My youngest is 11, severe nonverbal, autism. He does talk but at a 2 yr level. Wed night the psychologist called. See they redid the testing using all nonverbal tests. Comes back age 15. Wow, eh? Do we want to redo his IPRC.... No!!!! See his IQ now is 77 he no longer qualifies for the class he is in. Heck he didn't in gr 4 when he went in it. She was truly surprised. That testing just told us the fit was the right one. Like your daughter that is the most important. Thankfully only I can change the IPRC, once they agreed to identify him. IEP's are available to all.

Just glad that it went right for your little one. We shouldn't have to fight, to prove, or to defend--sigh--but when we have multiple kids on the spectrum it can be way too easy for some outside "expert" to assume we see things that aren't there or that the one we are fighting for is behaving autistically because he or she is modeling the behavior and therefore doesn't need accommodation. Sigh...

I was the opposite to you in this: I was an excellent Brownie and then Girl Guide, especially as I then got lots of opportunity to get 'badges' etc in relation to my interests. For children it suits, Guides and Scouts are a great outlook: am bemused as to why you have to pay to lead a pack! Wouldn't happen here :)

I loved your telling of your Girl Scout (mis)adventures! Btw... my boy is in Scouts this year and is supposedly, allegedly, going away to th UK for a 10 day scout camp! I'm bricking it!!

I really do hope your darling girl gets all she needs. She has THE best Mama behind her, that's for sure ;-)

I volunteered to be in charge of Garden Club for 25 second and third graders. By the end, I was thankful every child was accounted for and no one went to the hospital for a mistaken shovel to the head. Every try and get a bunch of kids together and plant pansies??? I would suggest you don't. :)

Girl Scouts was not my fun childhood experience either. I loved my brother's Boy Scouts and expected Brownies to be similar in a good way. The organization was similar, but the "fun" was removed in favor of the "girl" part of things. Blech.

I also remember convincing myself that Ben wasn't autistic, not wanting him to be, not expecting him to be. He was so very different, especially as a baby. But I had a harder time convincing the professionals (not the therapist kind) that he was. I got so tired of hearing, "He's just behaving like his older brothers." Which would be a solid argument if his autism resembled his brothers' autism, which it didn't, which was the whole point.

Alas, the diagnostic process does NOT get easier the third time around.

@Stephanie-EXACTLY! I wanted to camp and make fires and climb trees and cut wood...instead we did "crafts"..ewwwwww...

Again-yup..I was the same way with Oscar..in fact we had one neurologist tell us "he makes eye contact-so it is ADHD.." no worries that he didn't talk or babble...among a few things...sigh For my Lily-who does indeed have ADHD-we were told..."she is acting out because the severe handicaps of her brothers take all her parents attention"-the evaluator had never even met her brothers! As for Zoe-she blends...hides..is so quiet and "good" that (even though she received a solid diagnosis 3 years ago) I am imagining things...*SIGH* so very frustrating!!!

It's very frustrating when the doctors/diagnosticians get so stuck in their own stereotypes they stop seeing what the diagnosis actually includes.

I hope, someday, there's be a less subjective way to assess people, but that will bring with it its own can of wiggly worms.

my other replies disappeared!! Thank you everyone for the comments..
@Stephanie-it is frustrating..I was told "I showed my colleague(who has spent years diagnosing) her paper work-etc...and he said "I was crazy for even suggesting that she was on the spectrum"..firstly-how unprofessional for someone who has never met my girl to make that claim...and secondly-girls present differently..*sigh*

But, yeah, girls present differently, you can't diagnose via paperwork, and using the word crazy to describe a parent who's been there multiple times...not only unprofessional, but very arrogant.

Maybe someday he'll get a clue. The one that really aggrivated me retired. That works, too. ;)