~"Well I looked my demons in they eyes laid bare my chest, said "Do your best, destroy me. You see I been to hell and back so many times,I must admit you kind of bore me."~
Ray Lamontagne 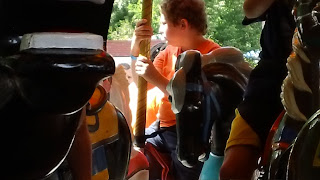 Last month-Oscar participated in his very first Special Olympics..The first because..well,  it wasn't something we had ever thought about. I mean, we are pretty much wrapped up in our day to day lives with each other..It just hadn't really occurred to us to look outside the comfort of the familiar. Or maybe it's that I just never bothered.   So when Oscar came home saying he wanted to go to the Special Olympics...we were kind of surprised- seeing as our boy...well... he is not not an athlete or even slightly athletic...or really ever inclined to move unless it involves a computer mouse or a Wii remote.  "Oscar, you do know that these Olympics are about running and jumping..doing sports-right?" "I want to do it.".."alright...but you know you are going to have to practice every day right." "Yup.".."If you sign up-you can't change your mind..it means that you are making a commitment..you will have people counting on you." "Yes! I want to do it!" "Well o.k. then." Which would have been fine-except, Sam overheard this conversation and decided he wanted to do them as well...How do you tell one son that he isn't quite as "special" as the other?

We have always raised our kids equally-regardless of whether or not they were- or where they might be -on the spectrum.  They see each other as equals-they treat each other as equals. Yes-they notice their differences..but they take it in stride. It is just the way it is, and how it has always been.  Oscar stims (a lot) his conversational skills are different...but that doesn't stop Sam from imagining a future where he is an uncle to Oscars kids..or Lily from talking about how they will visit each other at college. It just doesn't occur to them to think any differently..  But lately, I find myself wrestling with why we have raised them this way..is the future they imagine even realistic? Or am I doing a bit of magical thinking..if they believe it -it will happen?

Maybe it is both.   It's like the minute you have a child, your mortality(something I had never really thought about) becomes everything. I remember holding each of my babies and thinking "no one in this world will ever love them/take care of them/protect them the way that I do..so I can't die-EVER." I think that having kids with disabilities- ups that anxiety. Like it or not-I am going to have to die one day..and I find myself caught in this never ending cycle of hellish worrying.."Will they be o.k.?" They have been brought up to be strong in who they are, to think that they matter and to believe that they are as equal of possibility as anyone else in the world ..And yet..I worry if that is enough..especially in a world that judges more on what you are not- as opposed to who you are..

Oscar wants to be a teacher one day.  A fine and noble profession..and-a much better choice than wanting to be a duck-which was his intention for many years.  There are so many people who say "that's great-he would be wonderful"..and equally as many who say "That simply isn't a possibility." and still a few more who have just shaken their heads and said "Oh...dear." Crazy as it sounds-all of them could be right. (with the exception of the ones who said "oh..dear"-people like that don't get to be right.)  Last year, I sat in a meeting discussing long term goals for my boy. Someone said "I  want him to be able to go in to a store-and know how to use money and make change." And I just...stopped for a moment...because It felt like I had jumped into a pool of icy water... I knew that these words were truth..they are realistic... Only I had kept the honesty of them hidden from myself...from the world for so long.  Those words placed my heart publicly on the table-and now everyone could see how it beat.

So, we went to those Special Olympics-not really knowing what to expect either from the events or from Oscar.  I found myself looking around and feeling so totally overwhelmed...and more than a little bit sad. There were many different kinds of "special" there-and to be totally honest..I wasn't sure if this was the kind of special I want Oscar to be. I know-I'm not supposed to say that out loud.  I know that it is considered a "sin" (by some) to think that way-believe me, I beat myself up enough-I don't need help...But he is my son-one of my greatest joys..and I want the world to be easy for him.  But since it isn't-I will do everything that I can to help him to become the adult that HE WANTS to be.  He may not wind up teaching..but then again-maybe he will. He may not be able to live a fully independent life..but then again he might.  Right now-we just don't know...and I honestly don't like it.

My boy is some ways is an enigma-we just don't know what to expect.  At the Olympics, he did really well. He happily participated in all his events. Although when it came to running...He stood at the starting line..."On your marks...get set....GO!"  Oscar took off...running as fast as he could..running the whole race...running across the finish line...and in true Oscar fashion..he just kept on going...long after the race was finished...Go Oscar!

Ask Kim about the pics I sent last week. Our area does 3 days of SO to take in all the primary and highschool spec Ed kids. Best part nobody is different.

That's the thing, isn't it? We don't know what the future holds. However, I feel that if our kids have dreams then we must nurture those dreams. I think that it is fabulous that Oscar made the commitment to be part of the Special Olympics. Go Oscar!

Great post Dear. Oscar will always have the many gifts that you have bestowed upon him. He is loved unconditionally by a close knit family. His brother and sisters will always be there for him and each other. That goes a long way in this world. Love, Ei

@farmwife-thanks I will..
@brightside-no we don't and I find that lately it truly bothers me..
@Eilenn-thanks..maybe it does go a long way in one sense..but in another? Who knows..

Oh yes this post pressed lots of buttons for me. The one where I still keep trying to stay fit because I just cannot die, I cannot leave my daughter. The one where I want her to be valued, to be able to do something that the world recognises as a contribution - Oscar will. In Ireland there are teaching roles for adults with special needs - and there is a HUGE need for autistic adult mentors for children.

I also 'get' the different types of special. My son does not put himself in the same category as Smiley, and I can understand that. And I look at my daughter and I am so glad that she is pretty and well-behaved, so there is a special that I don't want to have to deal with either...

Am getting all emotional now, so I'd better stop! xx

@bluesky. I feel bad about causing distress. These issues have been weighing very heavily on my mind lately ... no, there are not any guarantees for my Oscar. My boy is an enigma. Hard thing about blogging positively is that I focus mostly on the good or funny stuff. Sometimes it leads peopke to be, ieve that my kids arwnt very impacted by autism. The three of the. On the spectrum are on very different parts of the spectrum with Oscar being the most impacted. He is a great and very funny young man. Unfortunately his ability to communicate in a way in which everyone understands is at times very limited one day he will know something and the next it is literally gone. One day he can answer a question and an hour later he can only repeat what is said to him (echollia) that is why I say everyone is right in their opinion of him. And no I am so not confident that he will be alright. So I cant die either.

Sorry for the misspellings! My laptop is in for repairs and I am working on a tablet. The keyboard is weird to me!

I understand how you feel. I believe in the possibilities of all our children and I want to work to make those possibilities a reality--because they can be.

But will it be enough?

We're making progress, but will it be enough for our kids by the time they're ready?

That's not enough. But we can work to make the changes we want to see become the reality our children know.