No skeletons...letting a Zombie out of the closet...

~"I expect a Zombie to show up on 'Sesame Street' soon, teaching kids to count"~
George A. Romero 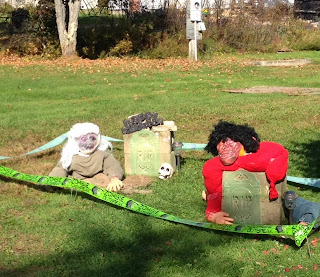 I used to feel that I shared an understanding with Zombies, a sort of "kindred spirit" special bond kind of thing.. The aimless shuffling and lurching-the glassy eyed lust for brains -although I never wanted to eat any. I was more of a vegetarian kind of Zombie.  The only brain I was interested in finding was my own ..At the time, we were living in the land of sleep deprivation...and a fully functioning brain was nowhere to be had.

How times have changed.  When my boys were younger..I don't think that they believed in sleep. Really.  If staying awake for sometimes day long stretches were a religion-my boys were devout orthodox followers. Although, they worshiped very differently.  Sam did sleep for stretches at a time..I don't think Oscar slept for the first four years of his life. But, by the time he came along-we were already so sleep deprived that it just seemed like "business as usual".

No, Sam would trick us.  He would go to bed..and "look" like he was deeply sleeping.  enough so that we felt confident in relaxing into sleep ourselves. We were so hopeful!  At around 2:00 a.m., he would BURST into wakefulness..just EXPLODE into full consciousness.. He was awake-and like it or not-everyone within a five mile radius was going to acknowledge this. The only way we could soothe him...the only way he would calm himself down was by watching the same video...over and over.  "La La and the bunnies" (from the Teletubbies.) If there were a "Guinness" world record for watching one specific video-Sam would have owned it-in spades.  To this day, I can still (sadly) repeat most of the script.  not that there really was one-as Teletubbies say very few words..but still! And....*sigh* I have to confess, La La the bright yellow Teletubbie brought something out in me..something that kind of scared me (at the time) Something that to this day still causes me to cringe a little....Deep Seething Anger. Yes, I must admit- I wanted that thing dead.  I even imagined the headlines.."Mother loses her head-decapitates La La " or the Lifetime movie "Death in Tubbieland-a Mothers rage."(They'd probably get Valerie Bertinelli or Alan Rickman(think Snape) to play me)  I don't know what it was-but by the fourteenth or so viewing of the night..I would just want to beat the...stuffing out of it..trounce on it's round belly...rip the hanger shaped thing off of its head. I was just so furious...and just so very tired.  Thankfully...thankfully, we did get through those years with barely any tubby carnage.(I have a dear friend who got great joy in sending my kids various La La toys at that time...plastic, stuffed-ANIMATED...which from time to time I took my frustration out on-funny, that same friend wound up living with us for a while back then...after which she NEVER so much as whispered the word Teletubbies..hhmmmm..karma anyone?) I am secure in the knowledge that La La is haunting the sanctity of someone else's home..with her stupid bunnies and tubby toast. But I'm over it-really! At least now, 13 years later..now that Sam sleeps....Although...

When we were going through this trial by Teletubbie, I used to frequently say to Sam.."When you are 16, I swear I am going to wake you up and tell you that "I'm lonely-I want company-I want to watch La La!"  Occasionally, I remind him of this promise...Especially on days when getting him to wake up before noon requires mad skills,,precision and thoughts of dynamite..

He's got one year. Mwhahahahahahaha!
Posted by kathleen at 7:00 AM

Any suggestions for what I could do to Britney? The obsession is still going strong here after 14 years: though at least it's usually only watched once a day....