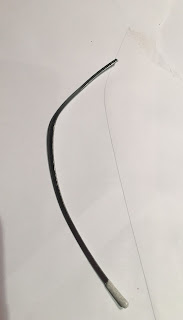 There is only one half day of school left. I plan on being appropriately dressed for it..I am  going bra shopping tomorrow. I will not be buying any with under-wires...just in case. I can not wait for this school year to be over.
Posted by kathleen at 7:00 AM

Ah, yes! The old beloved bra ( AKA the only one that fits). Yes, you do qualify for sainthood in these circumstances. Good luck on the bra shopping :-)

Oh dear! Only you, could this happen to...when it did! Hilarious, but I'm glad everything was sorted.
I know EXACTLY how you feel about school ending (and getting a myriad of projects completed) as we've just finished our (proper-serious) state exams!
It feels wonderful that school is finally over for this year doesn't it?
Happy summer :-) xx

@Susan-I have Omar buy all my bra's...believe it or not..he finds the best most comfortable ones...:)

@Jazzy-yes..they were promptly sorted after the meeting! :) State exams??!!! Our boys...wow...they really are young men now aren't they? Happy summer to you as well!