~"The biggest thing I remember is that there was just no transition.  You hit the ground diapering"~ Paul Reiser 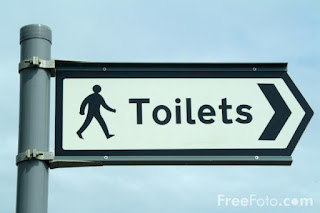 I have been reading many blogs lately where the topic is "potty training".  To this day, I still look at it as one of the biggest challenges I have ever faced as a parent.  Not wanting to ever take any accomplishments for granted-I sometimes look back over my early posts to see how far we have all come.  So, not wanting to look a gift potty in the mouth-I thought I would repost this..We have now been diaper free for  four years, six months and twenty four days....not that I keep track or anything. So here is a celebratory repost.


If karma is a boomerang and reincarnation is fact...Then I must have done something awful to a toilet in a past life.

It never fails...the moment we get into a store one of my herd always has to use the bathroom. Usually on a day when it is 9 degrees outside, so that my kids are undoubtedly bundled up in enough outerwear to provide warmth to a small village. So into the restroom we go-all of us. Because the minute one has to go, they all have to. By the time everyone has finished, washed up and re-dressed, it is spring. They no longer need their outerwear, and I am stuck carrying it around the store.

I really can't complain. There was a time when I thought none of them would ever be potty trained. I had visions of myself following them to college or down the aisle carrying wipes and pull ups.


All of my children struggled with potty training. One of my boys however, had the hardest time. He was not fully potty trained until he was five and a half. It was at first a battle of epic proportions. I very much wanted him to do something that he had absolutely no interest in doing. To this day I still don't know whether it was a sensory issue, a control issue or a little of both for him. Regardless, he just did not get the point of pooping in the potty.

At first we tried everything and anything we could think of. Rewards, threats, books, candy, vacations, cash (I was desperate)...It got to a point that I would have done ANYTHING to get him to use the potty. Nothing worked. In fact, the more persistent I became-the more resistant he was. It became the single most important accomplishment to me-and that was the problem. I made this issue all about myself, totally disregarding my sons needs or wants. I needed to look at this from my sons point of view. Everything I had been doing, the bribes, the threats, etc. had only created anxiety for both of us. I needed to step back, to reevaluate, to come up with a new strategy. This was not about me, but rather, about him. How could I help him to understand that using the potty was an important accomplishment. That staying in diapers would only hinder him...especially when he started going on job interviews...

The sensation of sitting in a dirty diaper did not bother my son. I had to find a way to connect that sensation with something that would bother him. Something that would make the connection in his brain that said "being poopy is bothersome".  As he is pretty regular, this step was not hard. I would simply make sure that he was engaged in a favorite activity when the time came.  If it was a movie, I would turn it off , or I would remove the favorite toy he was playing with, all the while calmly saying he could have it back after he was changed. This was not always easy-tantrums did ensue. I did not give in. Instead, I would calmly suggest that using the potty would not take him away from his favorite things for so long .  After a week or two of this, he was more compliant. The next step I took was having him change himself. This step is NOT for the weak of heart, as poop can be rather appealing in look and texture to some people .(as a side note and point of interest, poop can remove paint. It should also never, ever be in the vicinity of ceiling fans or any other type of fan. period...especially when the fan is on.) I LEARNED to always make sure he changed himself in the bathroom-dumping said poop into the potty. (another point of interest-once a child learns to flush-hide all small objects. On the positive side-my husband and myself have mastered home plumbing projects.) Gradually, over about eight months time, my boy made the connection that pooping in a diaper and changing himself took far too much time away from his favorite activities. On June 16th, 2006 at approximately 2:48 p.m. he used the potty successfully-and continues to do so.


So now when I find myself with a herd of kids in the supermarket bathroom, I find it hard to justify complaining too much. Although, if they could all just "go" before leaving the house...alas, I am not a miracle worker.
Posted by kathleen at 11:07 AM

I loved this! Both my kids were late and DIFFICULT to potty train. So I get it. BELIEVE ME!

Even though they're trained now, we still have a problem. My daughter..aka She With the Wee Small Bladder...has to GO, much more frequently than I would like or is convenient. She does go before we leave the house, and about 70% of the time, still has to go once we get to the store. Fortunately, our "herd" is not so big.

Believe me, the public toilet issue looms very large when you have a teenage boy who needs supervision and no 'disabled' toilets available. Do I take him in the ladies? (no) Can I go in the gents? (definitely no) No, I'm not nostalgic for diapers but they did prevent some problems!!

This is great advice Kathleen. Very NLP. Forwarding to my friend who is struggling this issue.

All three of mine were difficult to potty train, especially Bobby. Not something I take for granted now, ever.

I am convinced this is the reason people hire nannys. So just so I can potty train their children lol

That was some genius methodology you employed there. Never heard of that approach. My daughter always decides she has to go when we are somewhere with the most heinously disgusting toilets...like Port-a-Potties at a carnival.

Wow, that's an impressive strategy for potty training. It's not one we've tried, but I'm going to pass it along to my husband and see what he thinks.

We only have one of three potty trained, and that job interview thing...definitely on our minds!

So glad it all worked out in the end..and can totally understand why you remember the date!

@ life-thanks :) Oh I know..it never fails with us-we get anywhere and someone immediately has to go..and I'll say "does anyone else need to?" I'll be met with a chorus of "Oh no-not me" Until we are somewhere totally inconvenient..sigh...;0

@bbsmum-I absolutely understand what you mean..There are times when at least with a diaper you didn't have to worry..Also(my boys are big) taking one in to the bathroom can lead to unpleasantness from other people..

@Kwombles-no-never ever taken for granted! :)

@Angela-hahahahaha! You are probably right! ;0

@Lynn-ha! It wasn't planned-it just wound up being that way..

@Stephanie-This took a long time-a lot of patience-BUT it also made it HIs accomplishment-his choice..which I think helped. Once I took my needs out of the equation, it went smoother. I also knew without a doubt that he was ready and capable-that he had control (there were incidents when he would do certain things on purpose-because he could) So I didn't feel bad about being so vigilant. The hardest part for me was sticking to my guns and not giving in. I feel like what could have been an awful and traumatic experience for him-became a gentle transition..although he wasn't too happy about it in the beginning.

@Looking for blue sky-I will never take it for granted. Funny though-something that was so hard and huge to do...I've yet to meet anyone who remembers when they were potty trained-nor anyone who asked "how old were you when..?" Interesting isn't it?

I agree that it takes a balance between making it stress-free (or stress-minimized) and sticking to your guns. That's something that we've struggled with. I really hope these ideas help!

Hi Stephanie-Oh I hope they do too. Or at least lead you to finding the way that works for you guys. :)

Actions and consequences still aren't the boys' strongest points, so we think we're going to have to tweak the ideas a bit. But your approach is different from any we've read about before, so I'm hoping the new ideas that are percolating will bear fruit.

I'll definitely post about when we come up with our next move in this area!

My son is six years old, and I think we're almost done potty training. It's been a long haul. Now he just needs to concentrate while going pee so that he doesn't overshoot ;)

So we're using my Tag Along Adventure token economy system (found on Etsy.com) to help motivate him. Rewards work for Drew, thankfully!

Thanks for sharing your potty training story!

Hehehehe!! Important, yet funny post! I can just see you herd your herd into the loos in winter gear and leave in springtime!

I didn't have huge problems training Wiiboy, which was good.I didn't bother even trying to train him til he was 3 yrs old. Worked well for us. Until there was an issue visiting in-laws who didn't accept diagnosis....that set ue back about 6 weeks! Sigh..!