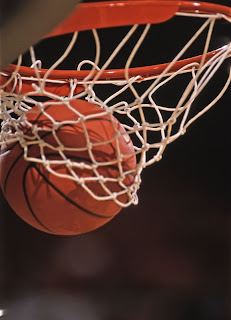 It is blog gems time again! This week the meme is happy thoughts.  Click on the gem to the right of the page, and join in the hop.  This is a post from a year ago..
"Veni, Vidi, Vici"
Julius Caesar

I didn't know just how determined he was. I should have suspected something seeing as how he was fully dressed when I came downstairs this morning. Sammy is a slow starter in the morning-a really slow starter. Frozen molasses runs faster than he does. So I should have noticed that he was up, dressed and ready to go...or at least commented on it. But, I had things to do. Sammy had a basketball game, and getting everyone dressed, fed, and out the door takes monumental effort-and at least two cups of coffee. Sometimes more..o.k. actually most times more.


Sammy plays on one of his school basketball teams. It is actually a nice set up. There are about six co-ed teams of third through fifth graders. The focus is primarily on teaching the game rather than on competition. They practice once a week and every Saturday there is a game. Today was the last game of the season. So I was pretty happy...alright, I admit it..I was thrilled. Monday through Friday I rush every morning to get them out the door and onto the bus. Do they have hats, jackets, snow pants, lunch, backpacks, clean faces... sigh..it's always rush rush rush...So the idea of getting back one of the mornings where I don't have to do anything.. well...it's thrilling.

This is Sammy's third year of playing for a team. Sadly, it will probably be his last. Next year, in sixth grade they hold try-outs...and I don't think he'll make a team. He has some large motor skills issues. Although he is a speed demon on his bicycle..running and dribbling a ball is very challenging to him. He doesn't life his feet off the ground when he runs..add a basketball and the results are..well, he struggles. Don't get me wrong-he has improved immensely since third grade. The first year he played, if he saw one of is friends on the opposing team, he would stop to hug them. The second year, anytime he got the ball, he would break down laughing in the middle of the court. This year though... this year he was different. He was focused. He concentrated on defending his basket, and in passing the ball. In fact the minute he got the ball, he would pass it- immediately. My Sammy is tough, but he isn't aggressive. For him, I think it was more about just playing and being part of a team, rather than scoring. Until today that is.

Today he was driven..like a dog with a bone. Come hell or high water, he was going to score. And nothing was going to get in his way. First quarter-Sammy gets the ball..there is no room to move..he is so focused, so set on shooting..he bounces the ball with both hands and walks three feet to the basket..and shoots! and misses..He looks at me-I give him a thumbs up. Second quarter, he gets the ball..he shoots! he misses..it rebounds off the backboard, he grabs the ball he shoots! he misses..He looks at me, I give him a thumbs up. Third quarter..he's fouled, goes to the line..he shoots! he misses...he gets fouled again he shoots! he misses..he gets passed the ball..he shoots! he misses..he gets passed the ball again..he shoots! he misses..My boy must have attempted to score at least twenty times..and every time, he looks at me, and every time I give him a thumbs up...by now everyone has noticed..and is rooting for him...his team mates..the opposite team..the audience..everyone wants him to score. His determination is contagious..The tension was palpable..(I was a wreck) I don't think that there was a person there that wasn't captivated. They can see how badly he wants this. How hard he is trying.. it is no longer about watching the game....or about disability...or the fact that my boy is autistic..it is about Sammy. It is about my boy wanting to make a basket. In the fourth quarter, with thirty seconds left in the game...his team mate gets the ball..he could have scored easily..gotten the glory..instead.. he passes it to Sammy..I hear him say in a matter of fact way.."You CAN do this Sammy"...as if it is no big deal...as if it is just a common every day thing..as if he expects no less. Sammy takes the ball..and shoots..in what felt like slow motion .. it goes up..up..and then ...Swish...nothing but net. Everyone cheers in excitement...and relief! My boy looks at me..he is shining.. I give him a thumbs up-(even though I wanted to rush down and grab him and hug him.-but a mother doesn't do that to an eleven year old boy, especially in public) he runs to finish the game with the rest of his team.


The cynical and jaded part of me could say "oh, how nice..yet another "autistic kid makes a basket..the crowd erupts" story. But that wasn't it at all. Sammy has been at this school since he was seven years old. He is an accepted part of his class. Those kids didn't pass him the ball because of his disabilities..but because he was part of the team. Sigh... Sometimes, I need to remove my sarcastic self from the picture. Because sometimes a game is just a game..and a kid is just a kid. Today my kid was determined. He came, he saw, he conquered because he can..he will and he does. How's that for awareness?
Posted by kathleen at 9:36 AM

Awww that's a wonderfully heartvwarming story, made me smile. Bet you felt so proud :)
I have popped over from Blog Gems x

A year later and I'm still smiling at this one!! GO SAMMY!

This post was new to me, and I LOVED it! I was on the edge of my seat rooting for Sammy. Great post!

That story is Hollywood worthy. Awesome.

Kathleen,
I love how much determination Sammy showed and way to go with trying until he made the shoot. This is such an inspiring story.

That was really awesome. I am so impressed by how everyone wanted for Sammy to have what he wanted so much for himself. This gave me a nice lift on a day when I've seriously been having trouble thinking past just making it through the day. Thanks for sharing.

I'm sorry I'm so late with this! Life, yanno? Of course you do.

Kathleen, the way you wrote this I was on the edge of my seat. So proud and happy for you all. :-)

@ DSWalker-Thanks. Sammy IS an inspiring kid.

@Diane-Thanks..Sorry you are having a rough time of it-hope things have gotten better.