This week on Plague House...

~"The Guide is definitive. Reality is frequently inaccurate."~ Douglas Adams 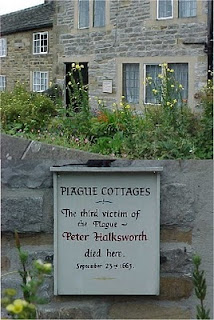 I don't know if any of you recall a television series on PBS called "Frontier House". It was an educational reality show on what life was like on the frontier of the U.S. in 1883.  This was not the only show in this series. There was also "Manor House" and "1900 House"..I loved these shows.  They took modern day families and let them live the experience of those times- filming it for my viewing pleasure. This is reality television that I can understand. Because, I just don't get what the fascination is with shows like "Jersey Shore" and "The Kardashian's". Really, what is there to learn -aside from "How to look your best while slamming down shots and picking up strangers"?  Maybe it's "How to make millions of dollars by doing and wearing almost absolutely nothing?" Either one-I don't have the time or interest.

Sammy once told me that he would love to be the star of a reality series...until I explained (and demonstrated) what living with a camera in your face would be like. "Besides", I told him  "What would be so interesting about us that would make people want to watch? Me doing laundry? You getting on the bus? I could just see the cliffhanger-Mama serves a different brand of frozen pizza! How will the herd react?!!"  Unless there is a new television network called "Tedious" I don't see us being offered a show any time soon. But...say they did?...if a network came to me and said "We would like to give you ten million dollars to film a week of your life-any week you choose"..I might consider it. For educational purposes of course. I'd  also  have chosen this week-and called it "Plague House" Because nothing screams good television like four sick kids...Yes, this week, all of my children came down with the flu..falling over consecutively..like so many vomit filled dominoes. It started a week ago Thursday with Oscar moved to Sammy, on to Lily and at last seems to be finishing up today with Zoe....sigh..even the dogs were involved.

Oh the possibilities are endless..I can just hear the intro .."Today on Plague House..watch as Kathleen repeatedly cleans her now "colorful" carpet after one of her dogs eats crayons!! "...or "Today on Plague House..Kathleen learns that the phrase "Mama I made it to the bathroom!" does not necessarily mean that the toilet seat was up." I can imagine the audience either sympathizing with or loathing me when Oscar falls asleep in the middle of the busy cafeteria at lunch because I sent him back to school before he was ready.. I see them riveted to their seats watching as Omar rushes Lily to the pediatrician..and my conflict in wondering if I should pick up the phone when the nurse calls leaving an admonishing message on the answering machine- because we are late for this appointment that they squeezed into their already over filled schedule just for us... The passion...the drama...the three kids simultaneously throwing up with and one bathroom!  With the exception of scantily clad women-(unless you count me-wearing fleece sleep pants and one of Omar's tee shirts-I bet you somewhere someone finds that sexy) we had the makings of a hit reality television series.

Fortunately, the herd is recovering. What an awful week it was.  I don't think that there is anything as horrible as the helpless feeling you have, when you know that there is nothing you can do for your sick kids but comfort them. That this is just one of those things that needs to be gotten through. Thank goodness for Advil, and ice, and a washing machine. For showers, and vapor rub..apple juice and television. Chez herd may not be a hit television series..but that is just fine with me, because I have had all the drama I could ever want in this past week-and all without watching one episode of "The Jersey Shore".

*To all my blogging friends-I'm sorry that I have not kept up with my usual Friday blog reading! Hoping to be back on track next week. :)
Posted by kathleen at 7:00 AM

I am so, so, so sorry. That sounds just hideous - and I've experienced enough gastrointestinal family fun to realize yours had to be way worse. I'm impressed you still managed to turn out a blog post, and an amusing one at that. I've seen Frontier House, and I did find it more compelling than typical "reality" TV. Plus you can always get my attention with a Douglas Adams quote. :)

Hope your herd feels better and stays healthy for a nice long while.

Glad the herd is on the mend!

Glad they're on the mend. ((())) I hope they all go to school next week feeling great!

The name of your reality show - "Farmers Nipples."

I'm reading so many vomit posts this morning that I could puke. That'll teach me for reading blogs over breakfast. Glad you guys are on the mend!

Ugggh, there is nothing worse than cleaning up one kid, knowing the other kids are next to be spewing. I'm glad you are all on the mend.

Oh yeah, I totally loved the PBS reality shows. The one where they were on the frontier was the best!!!

I won't hold my breath for you to get back to reading, because you know you're next, right?

I agree with Big Daddy Autism - Farmer's Nipples would be a great title. Glad everyone (hopefully
Zoe too), is on the mend.

I hope you're all feeling better now and getting back into some kind of routine :-)

Making it to the bathroom is a big deal. Willy does (actually into the toilet most of the time), but the others...just wherever they are. Even if they're leaning over my head.

And yet...never got the boys' flu shots.

you know you just might want to keep a bucket next to you at all times just in case...the kiddos decided to share :)

Mmmm vapor rub. Oops sorry got distracted there. Good to hear everyone is recovering.

Dog eats crayons sound like a low point :( So glad that they are all recovering and hoping the snow has melted too x

Generally speaking, reality shows try to avoid too much vomit unless its alcohol induced, so you may be in the free-and-clear on this one...but imagine if you had to live like Frontier House AND have had this week! Good Lord...THAT would have been enough to make us all appreciate modern conveniences.

Glad you're all feeling better! Thanks for adding humor to my life! :)

@ everyone-thanks for the kind comments..I must say HAHA! I laugh in the face of sickness..and have not come down with anything except angst at not having five minutes to myself!I wish the snow had melted...tomorrow is April first-and (not an April fools joke) we are supposedly having a tremendous snow storm -which means the kids will be home with me...AGAIN. sigh...perhaps we WILL start filming a show called "Farmers nipples"..if only to relieve the tedium! I LOVE the term Blurker!! It sounds so much like what my kids (and dog) have been doing lately!! :) I hope that you are all healthy. Kathleen