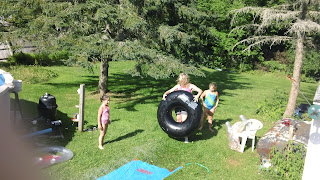 My son tells me he's lazy too and I'm starting to think about actually becoming the mean mummy that he thinks I am! Enjoy the zip-lining, my 50 year old hips would love to have a go :)

You need to use that James voice regularly. And can you PLEASE teach me how to do it?!! My, you are having a tough time with that poor foot of yours but I'm with you on this. NO WAY are you decrepit. 50 is the new 40, haven't you heard...and you're not quite there yet ;-)

Okay, you, my dear, are NOT old!!! So, REFUSE AWAY!!! There's a fine line between taking care and being paranoid. Personally, I tend to straddle that line, always have, just ask my mom. But not going on a slip n' slide for fear of breaking a bone--let's reserve that for people with osteoporouses or other brittle bone diseases, which has nothing to do with age or dropping things on one's appendages and thus breaking them. Thank you very much.

(However, I must ask: Why would you want to slam your body into the ground to go shooting down a wet piece of plastic?)

(Also, understanding that I tend towards caution, zip lining isn't nearly as much fun as it sounds, especially if the line is close enough to the ground for dragging of said appendages to be involved, so if it's not too late, I would highly recommend making sure the zip line is sufficiently in the air for there to be no dragging and also make sure that the place you stop is somewhat cushioned so you don't slam into a tree--which is never as much fun as it sounds and really doesn't sound like fun in the first place.)

Good luck! Have fun! Save being old for when you have great grandchildren, and hopefully that's later than sooner.

@Jazzygirl-thanks! If I ever make it to Ireland..I will be sure to pop by and teach you the voice!

@Stephanie-I used a big tube and slammed that on the piece of plastic! It was so much fun. The zipline was 40 feet up..no chance of dragging feet. although I have to say-I had a bit of mind body disconnect. Somehow just walking off of a platform into thin air makes no sense!! I really had to give myself a pep talk-AND let go of the pole that I was desperately clinging too. But I did it! More than once! I really really enjoyed myself...two of the herd? Not so much. Panic ensued...they didn't do it. Which is fine. But (I of course didn't say this) they really missed out!!

Yeah, walking off a platform into nothing--makes no sense. My feet prefer the illusion of touching the ground. Even if the "ground" is part of an airplane or a high rise.

But I'm glad you had fun! That's what really matters.