All dogs are service dogs...

~ "Dogs have boundless enthusiasm but no sense of shame. I should have a dog as a life coach"~Moby 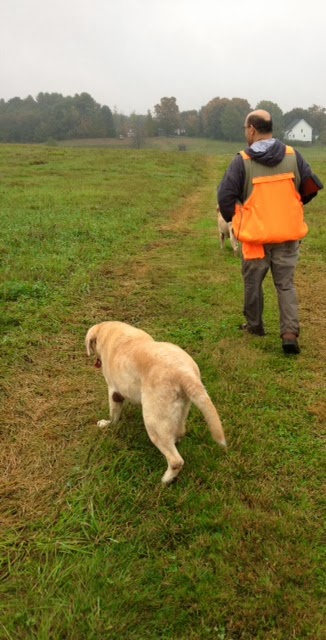 I'm not a religious person..Although I do like the idea of heaven.  Not as a place you get to go to because of your beliefs-but rather, because of your actions. In my imagination, heaven would be run by dogs. Dogs have no guile. They live in the present for the present. Wanting nothing but food and affection-and returning the latter in abundance and unconditionally.

It was almost twelve years ago that Charlie entered our lives.  At the time, I had two yet to be diagnosed boys (3 and 8 months old) who seemingly never slept. Sam, had stopped speaking a year and a half before-and Oscar never seemed to stop screaming. We didn't know what was going on-or what to do to help them.  We were living at out wits end.  So...us being the way that we are..did what we always seem to do best in times of great stress-we added to it! Enter Charlie-a rambunctious 8 month old yellow lab. Charlie needed a home..and we thought (actually we really weren't thinking) that we needed a dog.

I remember the day we brought him home. (We had driven eight hours down to N.Y. to get him and immediately drove eight hours back.  Charlie had been living all alone-in of all places, a mansion...with only servants to take care of him.  He even had a swimming pool. But-he didn't have a family. So we rescued him. Or so we thought.) He bounded up in to the house and came racing out with a dirty baby bottle in his mouth...and then a dirty diaper...and then some garbage. *sigh* The next eight months were filled with his misadventures.  He ate my futon. and my shoes...and lots and lots of diapers. He was so energetic and full of life. Escaping into the woods whenever I tried to leave the house..shredding rolls of toilet paper when I did manage to get out...and to my absolute mortification..running over to the Baptist church that was next door and peeing on the giant cross in their garden-but only when the congregation was present.  I swear that he spent most of his first year laughing at me..especially as I chased after him in my pajama's or other interesting outfits.Our Charlie had a wicked sense of humor..

He calmed down a bit after that first year..(.although he did occasionally wander off in the early morning hours..making me chase after him...again-in interesting outfits) Choosing to spend his days either at my side or lying in the sun...usually in a place where I was sure to trip over him..The thing of it is-he was always there.  From the first diagnosis eleven years ago, to the last four years ago. He has weathered crying babies, massive meltdowns..sleepless nights..climbing toddlers..birthdays, deaths..everything tumultuous plus all the wonderful that make up this life of ours.  He was part of our family-and we were his pack. My constant companion.  All he ever seemingly wanted- besides his ears scratched..or my lap to sit on(all 125 pounds of him) and the occasional garbage pail mistakenly left open to eat out of-All that mattered to him-was to know that he was a good dog.

The years caught up to my boy. His vision, his hearing..his hips..they were all gone. And although I could have prolonged his life...let him slowly waste away..it would have been for us. Knowing him-he would have stuck around...again-for us.   We owed him more than that.  We owed him peace.

.Yesterday, we took our last walk together. He and Bandit (another one of our dogs who deserves his own post) took their last steps-Omar and I walked beside them, as far as we could.. Holding Charlie on my legs and Bandit in my arms as they woofed their last woofs, breathed their last breaths..slept their last sleep.. It was peaceful, serene..and in its own unexplanable way beautiful.. My lovely, velvet eared, yellow headed Charlie dog has moved on-and I am bereft.  I hope that there is a heaven for them...one where they can eat dirty diapers and futons to their hearts content.

I am going to miss my pup..He was a good dog.

Labels: eulogy for a friend

So very sorry to read this xx

On top of everything else last year, I lost my two dogs - two brothers, 13 years old. Had them from 6 weeks old...

The damnedest thing is... a couple of times as I've been drifting off to sleep, I've felt the now deceased Major, jump onto the sofa and prod me with his paw in his distinctive ' you know I don't approve of humans sleeping during the day ' way...

Oh Kathleen, I am so sorry to hear about your beautiful Charlie. he has been very much a part of your fabulous family.

We have lost a pet recently too, Sunny the budgie. We only had him 3.5 years but we are still upset and miss him lots. We know a bit about how you're feeling.

Incidently, there were lots of screaming and loss of language skills here too ;-)
xx Jazzy

@Socrates-oh I am so sorry to hear that-they were lovely lovely pups.I believe that your boy probably is telling you to get up-but with the additional message "because you are in MY spot!"

@Jazzy-oh no! I loved your budgie tales...so sorry to hear that.