To whom it may concern-or Hey Person who picked the venue for today's state swim meet! 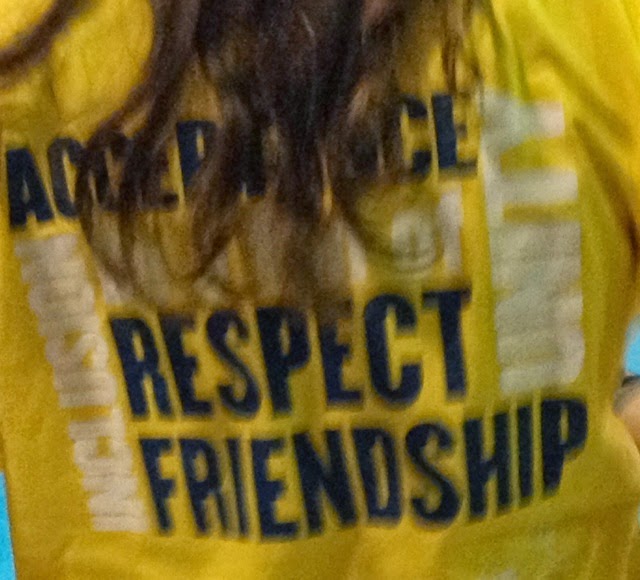 I sat at the special Olympics today. It should have been wonderful.  It is not often that people with disabilities (either physical or developmental) are able to get together without judgement to participate in sporting events.

But it wasn't wonderful. I sat there and quietly seethed because I knew of at least one individual who worked equally as hard-but was unable to participate. This was not through any fault of their own-it was simply because the chosen venue had no hoist to help them into the pool. Imagine that-a "Special" Olympian excluded because of the very thing that made them "Special". Equally as unthinkable-a Special Olympics venue that was not fully handicap accessible! It boggles the mind.

Yes, there were people who were eager to help-"We'll hoist them in and out of the the pool ourselves-whatever it takes!" To add fuel to the fire-there were no accessible changing rooms for this person."Oh we'll let you use an open area and stand around them holding up towels." While I am sure that these were well intended suggestions, that there was no malice-I am equally sure there wasn't any real thought behind them either..This is a human being. Someone with thoughts, feelings, a personality. A person  deserving of dignity and respect. Someone who wanted their moment to shine-not for the spectacle of being hauled into a pool by strangers-or made to change behind a shield of towels-but because they were an athlete-a participant. Accepted and Included.

Oh sure, I heard the excuses-when someone complained about this athlete being excluded, they were told- "You find a venue big enough to hold everybody!"  That doesn't  make sense. Really- what is more important?  A venue big enough to hold all the athletes or a venue that accommodates all the athletes? Had people known there was an accommodation issue(meaning  more than two days before the event) maybe they could have found a way to rent a hoist-or fund raised to buy one. Maybe a smaller more accessible venue (spread the event over two days) could have been used. Who knows what could have been done.  I do know however, what should have.

I thought about this as I sat there today-watching all of the happy faces-seeing the pride in accomplishment, the joy in success. I sat and thought about the person who wasn't there-who didn't get their moment and wondered how left out they were feeling.  I looked around and saw all of the bright yellow Special Olympic tee-shirts - emblazoned with "Inclusion" "Friendship" "Unity" "Respect" -all such lovely sentiments. I tried to measure those sentiments against the person who wasn't included...and sadly realized that today- they were just words. .

That athlete (and any others that may have missed out today) is owed a big apology. Accessibility, accommodation and inclusion-especially in the Special Olympics, should NEVER be an issue.Nor should they only be words on a tee shirt. This was unacceptable.

As the mother of a "Special Olympian" and of other children with disabilities, I have heard far to many times about why my kids can not be included in some things. I can't tell you how much I loathe the sentiment "The needs of the many outweigh those of the few" I did not however expect that attitude to bleed in to the Special Olympics. I am appalled.

That IS appalling, and it could have been my daughter. I haven't gotten around to enrolling her for the Special Olympics yet as the application form is going to be a marathon to get completed, including the need for GP visits, reports etc. Perhaps I shouldn't bother...

A very valid point, very well made.
It seems very strange that they chose a venue that did not accommodate all special needs...... for a Special Olympics event.
Incredible. xx

As an update-we actually got media coverage and the head of Special Olympics Maine publicly announced that this would never happen again!
@Bluesky-It is really a wonderful organization-this was just a huge mistake on their part..but once it was brought out in to the light-they changed it...so that is something..

me too! I actually find it reassuring that writing about it-and bringing attention to it from this blog post actually made this happen. So many people wrote emails..sometimes the quieter voices are actually listened too! It gives me hope for other things that need change. :)