~"The outward man is the swinging door; the inner man is still the hinge."~Meister Eckhart 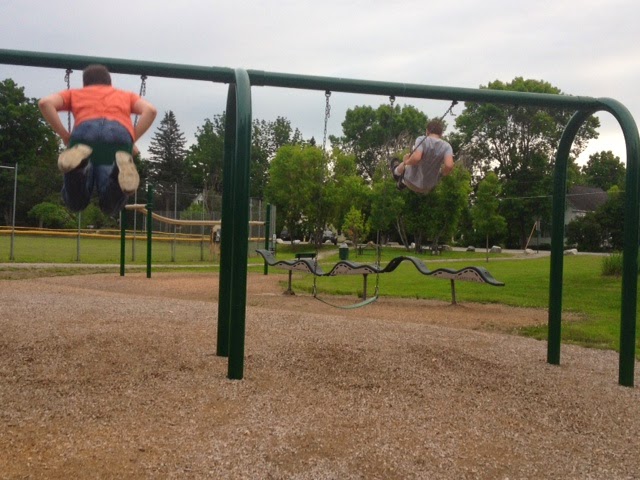 So, Summer is going the way Summer usually goes...mostly lazy days with a summer rec program sandwiched in the middle. Now that the kids are older, it is easier to spend more alone time with each of them. The boys and I have taken to walking most nights-exploring the different areas in town. Part designated route and part adventure. We walk down to the river and then over to the playground taking mostly different routes in between. The playground is always our final destination before returning home. Our last stop- with the wonderful swings.  We save that for last because by the time we get there, it is dusk and we don't want anyone else to be there. I mean really-swings! Who wants to have to wait for a turn?  Besides it would look kind of weird if we had to stand around ( a 50 year old woman and her 2 very tall sons) waiting for a five year old to hurry and finish. We also like the quiet-ending our evenings in the air. The three of us in our own heads swinging at our own paces. I think that it helps us all sort out the day or anything else that might be rolling around in our brains.

There is a lot going on for all of us right now.  Sam is at an age where he is just filled with longing. He is such a good kid.  So genuine and open-no angsty teen boy attitude. He doesn't grunt!  He actually talks to me! Real conversation!   He is so ready to leave home and start...living?  He feels like this town is too small and that there is no longer a place for him here. He wants to DO things-and he wants friends.  He just doesn't feel any special connection with any of his school "friends".  It isn't that he feels left out-but more like he can't find interest in the things they are interested in. He's chomping at the bit-and I'm trying to keep him steady...Trying to convince him that you spend more time being an adult than a teenager...that he WILL find his tribe..I'm hoping that with all the changes going on in our lives (running a restaurant) we can get him into some classes and activities away from school. Fingers crossed that this year will be better...

Oscar is all about going to camp this Summer. In his own words he "Wants to make friends and have my own adventures!" Next to Lily-Oscar is my most social kid. Language and processing difficulties and all. He so wants to participate in things-but, his disabilities exclude him.They shouldn't-but they do. He's a smart kid-he knows so much more-SEES so much more than many people give him credit for. He has these moments of verbal clarity-of precise thinking that just floor me.He also has a deep sadness. He knows that he is different-and while he is confident in who he is-he feels left out-alone. The other day, he was going down a hallway ahead of me...he passed two young men-(perhaps two years older than him) he was walking the way that he walks...flapping his hands at his sides..intent on going where he needed to be...Right after he passed the guys..they turned to each other and smirked..a kind of "get a load of that character" kind of look..until they noticed me. Yeah-they didn't expect me there.. I just looked at them-said nothing..just stared. Causing an instant look of almost shame.. (as it should)..and I walked on. What I wanted to do-and did in fact do later (in my mind) was smack them in the head..tell them that they were dumb-asses..tell them that my Oscar-my son- had more dignity-more character-more humanity-more confidence alone- than the two of them could ever hope to have combined. So, while I quietly agonize over these slights..agonize over his future and the world he will one day be an adult in...he remains persistent, confident and sure in himself.. He walks tall. I really hope that his week at camp is everything that he wishes it to be and then some.

As for me-I swing with my worries-and I worry about everything..my boys,my girls..Omar..will our house ever be done?..My chickens and sadly...my strapless bra. Have you ever tried to wear one of these things? Holy crap! I wear a lot of tank tops-some with "Y" backs-and I loathe the whole let your bra straps hang out look.. I figured I would try one of these strapless numbers. I don't know if I'm inept?  Somehow wearing it wrong...I put it on and it fits correctly-as long as I stay home.Really-I can do anything in it.  Kind of like the "Hair club for men" commercial (only with a bra instead of hair)..I can run..jump-swim even!..you name it-and it stays in place.  But the minute I have to go anywhere-especially if there are people-slippage ensues..I don't know why it happens!  I get out of the car-everything is where it belongs- and then I start walking (usually towards a group of people) and ever so slowly it starts sliding down my rib cage..at the same time turning around. Now, I am not complaining mind you-but, I am not what you would call "full figured"..in fact, I'm quite a bit less than full...so, my upper undergarments are slightly endowed...o.k.-they are padded! So...when this strapless band of preformed breasts slips and turns...I either look like my head is on backwards OR that I have started growing breasts on my lower back. It's downright unsettling! The only thing I could think of to do (besides duct tape) is to walk with my upper arms pressed firmly to my sides-while my lower arms swing up and down. My upper arms slow down the sliding and the movement  of my lower arms push it up in place. It also helps if I sashay my hips-it helps with the upward pushing momentum. This would all be fine and good if I didn't look like a woman whose laxative had just kicked in. It's even worse if I am just standing and chatting with someone and only one side slides down!  Then I oh so casually(so the other person doesn't notice) have to do an almost side bend while trying to (again casually) thrust one shoulder repeatedly in an attempt to get "things" back in proper position.  It's like playing with one of those party favors.  You know the plastic disc with the silver balls that you have to maneuver into the tiny holes. It's a delicate operation!. Oh such worries.

As you can probably tell-these nightly walks with my boys are necessary for all of our mental well beings. I am finding great solace in my swinging..This summer, it seems to be all that I need...as long as I'm wearing the proper support.

A multiway bra for extra support? Had to invest in one last week for a night out...

And I'd love some lessons in The Stare: My Mum was very good at that and I always remember her using it when she didn't like the way a middle aged man was looking at her 13 year old daughter at a bus stop... He retreated rapidly :) xx

Great post. I hope Oscar has a wonderful time at camp! Love,
Ei

So long as it's the right kind of 'swinging'!! I just knew, reading the beginning of this that you were on the swings too! It's a perfect end to the day for all... great calming, body-centering OT too ;-)
Your boys are amazing (as are your girls)I get Sam's thing with friends, I really do. They will both find their way on life, their niche. I am convinced of it .xx