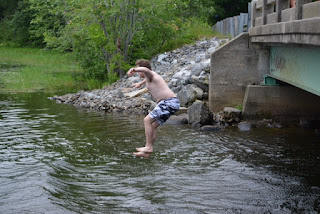 Summer has started-almost like every other summer.  The kids are all home..I'm not working at the moment (partially by choice and partially because I haven't found the right opportunity-yet) so..we are spending much of time just hanging out together. I usually start the summer off with some kind of game plan..a whole list of ideas of things we are going to do,,,but never seem to get around to doing. So, this year..there is no list. I'm just letting the days happen..as they happen..The herd is getting older..and I have realized that they don't need me to schedule their time so much anymore..They can entertain themselves, feed themselves,groom themselves...they can find their own socks..shoes...snacks!  And I-I am learning to be able to insist let them. .

It is liberating-this letting go. and scary..and anxiety causing and..... In two short years, Sam will be done with school! After which, he hopes to attend a program in California...over three thousand miles from home..Part of me is thrilled for him-he found his passion..his dream..his niche! Another part of me is anxious and worried and stressed,,can he do this? Will he be o,k,? The worry section of my brain envisions him wandering the streets of California wearing only one shoe (because he can't find the other one) snack-less and alone. I don't let him know about this worry of mine. I choose instead to focus on the positive..at least while anyone is around. Because for as much as he has grown,,as much as he has become independent-he still relies on my judgement.  It would be far too easy for me to convince him( and myself) that he really would be so much happier staying here-..at home..where it's familiar. Far too easy. I can not let my anxiety keep him from living his life.So, I push him..I push them all...*sigh* even though most of the time-I'd rather be pulling.

I have spent the last week or so cleaning out my garage. I have boxes in there that have not been unpacked in years..One of them contained my mothers scrap books. My mother has been gone for over half my life,  I was twenty three when she died. I may have glanced at these books once or twice during various moves,,but I never really looked at them.

My mother was very reserved..proper..a devout Irish Catholic. She had a wonderful sense of humor-if you could get her to let go-which is something that I worked hard at!  I mean-there were six of us kids-and if you wanted her undivided attention-you needed to work it. She never really spoke about her past..Sure, there were stories here and there..about growing up..skipping school to see Frank Sinatra..sneaking lipstick. We knew that she had modeled briefly-but she never said much about it...so, we never really asked.  and even if we did ask a question about her childhood or modeling or really anything from her past- she would always say "It was so long ago-I forget." *sigh*  Kids tend to believe what their parents tell them.

To say that I was shocked by her scrapbooks would be an understatement. It turns out that my mother was a very different person than she had ever led us to believe, There are pages upon pages of photos and articles..of this vibrant beautiful young woman... Modeling in N.Y. fashion houses..her move to California at nineteen..society pages..theater stubs..an article that writes about her being the "mistress of ceremonies" (for some event )where she "entertained the crowd with jokes and song"!   My mother entertained a crowd??!!  Who the hell was this woman? !! This was NOT the choir singing, crossword doing, bible reading reserved very proper woman that I grew up with.

I don't know what happened to her..what changed her...  I know that she loved my father..(I found such joyful pictures of them together) I know that she loved her children. But somewhere along the line-she lost her spark..her zest-her spontaneity...and it leaked on to us. We were raised (particularly the girls) to be ever so strong-never to be weak-weakness was a fault-sensitivity a sin.To be overly cautious...that trying new things would most probably end in failure...While I do appreciate her making me strong..and I am exceedingly strong..I wish she had given us permission to be weak...to occasionally break instead of bend. It is (I think) a luxury that I will never be able to have-whether I want it or not-I just wasn't built that way.

I try and be as honest as I can with my kids.  I don't hide much of my past from them.  Although, there are some things they don't know because they have not lived enough to understand them-yet. Also because I don't want to hear-"Well YOU did it.!" I want them to know that I have failed and succeeded..that I tried and sometimes things worked and sometimes they didn't. I am so afraid of holding them back..of letting my fears get the better of them..So I sometimes, have to suck it up as I push them forward. I want them to jump as high and as far as they want...it doesn't matter how they land- as long as they keep jumping,

My mom has been gone for twenty eight years, There are times (especially since I had kids) that I miss her deeply-and times when I don't think of her at all. Her past-her sadness- will always be a mystery to me. I find myself mourning a person that I never knew, I very much wish that she could have met Omar and her grandchildren. I think they would have given her such joy..and maybe..even possibly a little spark....

Motherhood..being a mother...it's a powerful position.  Even now, twenty eight years later, my mom still has an impact on my life. She left us these scrapbooks..perhaps as a cautionary tale..or maybe just an explanation..I don't know.  But I will take them and use them..to show my kids that their grandmother was quite the jumper in her day..and I will remember that no matter how anxious..no matter how worried I am about growing these kids-about letting them go..I have encouraged them to jump..hopefully, they will always remember that I jumped with them....

I kept re reading this post and thinking about your mum and wondering what happened to her, I'd say that there's an important lesson there. I get the strength thing too and I think I've passed it on, at least to my eldest daughter. But I've discovered that no matter how strong you are, you can have a breaking point! I think that bending is better, and I will aspire to do that in future :)

@Bluesky-yeas...I think so too (about the lesson) We (my siblings and I) have had a number of discussions about what might have happened-why she moved away...We have heard bits and pieces of stories from family members-but none of them fit...Anyone else we could have asked is dead...Oh, I think that everyone has a breaking point per say...That being said ..for some it is "controlled" breaking...don't know if that makes sense or not.....

Fascinating post. I really want to know more about your mother too! It would seem that something did happen for her life to change as it did. Although I consider myself a strong person I think it is good to break a little when times get tough. It can put you back together stronger...
Loved hearing about your kids. Making their own snacks? I a clearly doing this parenting thing all wrong!! xx

@Jazzy-Sometimes...sometimes I'd really like to just snap...I think it could be very liberating...although it would scare everyone as I am just not built that way...sigh. Making their own snacks is a definite game changer..a fabulous one! :)

I wonder did a single event, or a gradual change in circumstances change her into the woman you knew.
It's very difficult to escape an Irish Catholic upbringing. After decades of defiance, I find myself drawn back to it...I haven't figured out yet if there's something to it or if it's just the comfort of familiarity.
I can understand your mum not allowing you to be weak or sensitive....Catholics love a bit of repression (it goes very nicely with our stomach ulcers). I'm not saying it was right, or healthy, but I can kinda get it. Old habits etc etc.
It's an intriguing conundrum. I really hope you get some answers XXX

@Jean-I wonder too...I think that it must have been something..big.

I rebelled against everything as a kid..looking back on the arguments we used to have (my mother and I) I probably scared her...shook her up? I don't know...but I find it astounding how alike we were..only she seemed to give up..submit? I too understand..it was a different time-family, especially parents I think held more influence..I would love to have answers..I think..:)