On death and festive zombies..

~"Life is pleasant. Death is peaceful. It's the transition that's troublesome"~Isaac Asimov 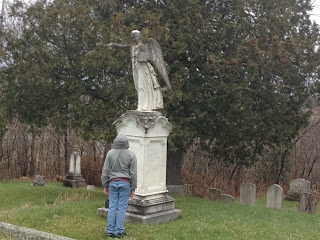 "Mama?  What happens to you when you die?" "Well..you know we've talked about heaven and reincarnation..all the different beliefs that.." "No..where do you go?" "What do you mean?" "Do they bury you in the ground?" Well..sometimes..I mean you have been to cemeteries before.." "You mean graveyards?" "Yeah.." "Lots of people are buried there.." "Yup".."But..But..How do they breathe?" "Well..they're dead-they don't need to breathe anymore." "How do they get out?!" "They don't need to..they have left their bodies.." "Huh?" "Oscar,   dying means that your spirit, the thing that makes you-you.. leaves your body.." "We turn into ghosts?!!"  "I don't think so..I really can't tell you exactly what happens..but..well, lots of people have different ideas about it..you know that..we've talked about it."  "I know."  Well...what do you think?" "I don't know." "Well...was there stuff you didn't understand?" "I don't know."  "Are you worried about dying?" "No.." "Well..help me out here bud..I'm not sure what you are asking me.." "Can I go on the computer?"

Death is a tricky subject with my kids. It isn't that it's difficult..more that it is hard to explain..They all have such unique perspectives on it. When Sam was little, he came to me claiming  that "when  people die they get to be come back as something else." I thought that this was pretty cool considering he wasn't much older than three.  Lily on the other hand-is very anxious over the idea of it.  Three years ago, my sister and father passed away within six weeks of each other. .(The kids hardly knew their Grandfather and they did not know their Aunt.) It was a difficult time for me-and,because of that, it was a difficult time for my kids as well Lily was a mess. Crying all the time..having trouble sleeping..I thought that maybe she was worried about MY mortality...So, during one of her crying jags..I pulled her onto my lap..rocking her until she calmed down enough to talk.."Lil?  You know your Aunt was pretty sick..and Pop?..he was 86!"  "I know." "Well...for them..death was a good thing..or an o.k. thing.  your Aunt was in a lot of pain and she wasn't gonna get better..and Pop..he lived a really full life." "I KNOW!" "Well..I just wanted you to think about that..I mean, I'm healthy..and I'm nowhere near 86." "So." "So..I just wanted you to know that I don't plan on dying for a long time.""O.k?.".."So I don't want you to worry about me or Papa going anywhere for a long long time..o.k.?"  "But...but..I'm not worried about YOU dying!  I'm worried about...(bawling)  ME!" *sigh* so, after reassuring her that she had very little mileage and was in the best of health..that her demise was so very far into the future..she was fine. Fine. No more anxiety..no more crying..she was good to go.

I admit, it is a tough subject to tackle with kids.  One of the ways we have discussed it-is through religion. We try and teach our kids a bit of everything. They know about Jesus, Mohammed , Buddha..You name it-and we probably have discussed it. They know of the Bible, the Koran, the Torah. But the main thing we teach is respect.That faith is personal. That it is not our place to question anyone's personal beliefs. Nor was it anyone's place to question theirs( they have them).I have really drilled in the idea that they need to respect other peoples faith and points of view.  They do a pretty good job of it...except...well..my kids can be literal thinkers..and it gets me in trouble.

Every summer, my town celebrates itself by throwing a festival. There are rides and food..entertainment and all kinds of booths. One of the booths is run by a local church. Now, I have nothing against this particular church..but it seems that no matter what-every single summer we have been here..I have managed to offend them in some way or other. Usually because of what my kids say-or don't say.  It never fails! We'll be walking by..and someone will catch one of my kids eyes.  "Do YOU KNOW Jesus?" They'll ask. (My kids have absolutely no idea of the context in which this is meant. None.)    "No." they'll say-or even better "Who?"..immediately all eyes turn to me in disdain...as if I were somehow depriving my children of religious knowledge and salvation..it is very uncomfortable-for me.  My kids?  They don't notice..except for Sam(who I explained this to)-he thinks this is HYSTERICAL. Next year-he's taking his brother and sisters around.

I really don't like when someone thinks I'm disrespectful of their beliefs. That is the last thing I ever want to do...well..mostly. O.K...sometimes..well..I'll tell you about this week and let you decide..

Now, my town celebrates Halloween. We have a parade, trick or treating..a haunted house..food..it's fabulous.  This year, in honor of the holiday-we decorated the house. We had cobwebs..and "Happy Halloween" signs..and a special display of zombies.... 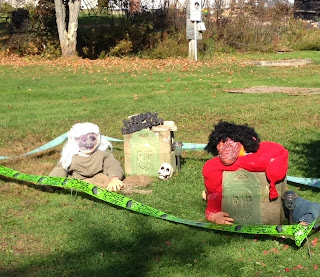 I thought that they looked great.  So much so..that I still have them up.  This has absolutely nothing whatsoever to do with laziness or a busy schedule!  Well, this past Tuesday, as I was pulling out of the driveway, I noticed a car parked in front of my zombie display.  I thought perhaps they were enjoying our tableau..and drove off. I didn't think anything more of it until Wednesday..as I was pulling IN to my driveway..I noticed the same car was parked there. My zombies are delightful..but two days in a row? I got out of my van to investigate just as a well dressed gentleman got out of the car and walked towards me..He didn't look happy..he was actually sneering! He said "We were in the neighborhood and thought you'd be interested in this"..he handed me his tract and walked quickly away.. 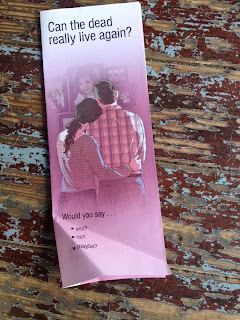 As I wrote earlier, I am very respectful of religious beliefs and faith.  It is certainly not my place to judge! But this kind of got me mad. (the inside of the pamphlet basically said I was going to hell unless..blah blah blah...) My zombies were Halloween fun. That is it. They certainly weren't meant to be a religious statement.Nor were they intended to mock anyone.  So...today, in response to that pamphlet, I decided to do a little early holiday decorating... 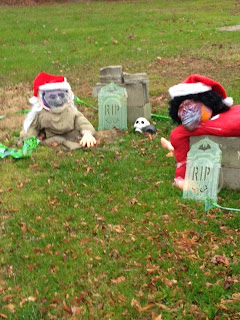 .    I really really hope that car stops by again.  I think my zombies look festive.
Posted by kathleen at 7:00 AM

Thanks for the laugh! I think you should add zombie elves and reindeer. Love, Ei

Love the festive zombies. It's giving me all sorts of random ideas of other things that could be made festive too...especially if people have annoyed me :) What a fabulous way to get revenge!

I love your blog and read it regularly but this is definitely one of my favorites! Sam and Lily are in classes with my boys and I can so often relate to the things you write about. Thank you for always giving me a laugh and letting me know I'm not alone in this crazy parenting journey!

@ anonymous-oh if only I could find those things! You KNOW that I would display them:))

@bluesky-thanks. Yup-I look at it as a passive non violent act of rebellion..makes me laugh too.

@Stacy-well hi! What a great compliment-thank you..I do know your kids-by sight and name at least...I am not sure if we have formally met..my head is usually in the clouds..but I will look for you at the next parent thingie at the school. Thanks for reading..:))