In defense of mothers...(and fathers)

~"But I know sometimes I must get out in the lightBetter leave her behind with the kids, they're alrightThe kids are alright"~ Pete Townsend 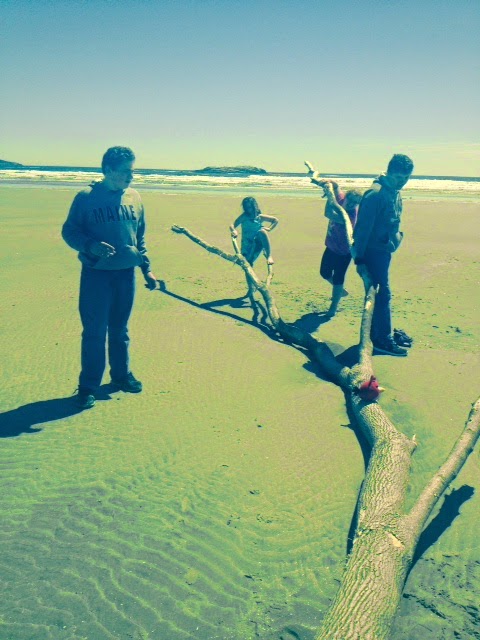 I ran out to run some errands today and I left the kids home. I left them home. Do you understand?  I went out-ALONE. I said "I'm going to the store!"..and with a chorus of "Bye Mama"  and "We need cheezits! and Oreos! and lemonade!"..and.. I slid into the seat of my stylish mini van..put the keys into the ignition..turned on the radio..and escaped left.  It was that easy. Oh what joy!  What wonder! What freedom at being able to turn the radio to my choice of music..and AND play it as loud as I liked!  Go figure..I had always thought that I would be a "cool mom"..you know, the kind that let their kids actually listen to music in the car.  My mother had always refused. "It distracts the driver!" she would say..and In my teen angst rebellion I'd reply.."When I have kids-I will always let them listen to the radio-as loud as they want!" Oh yeah-I told her!..Now, here I am..the coolest of the cool moms-and my kids prefer the radio off..they prefer the sound of their own arguing over the dulcimer tones of Led Zeppelin or The Rolling Stones...Although..there have been a couple of times when Sam has joined me-singing Bohemian Rhapsody at the top of our lungs as we tool down the road. . So I can't complain too much..

Anyway..there I was, in my stylish mini van..singing along with Van Morrison..off to the the great adventure of supermarket shopping. Any stay at home parent knows this joy. That heady feeling of perusing produce..I didn't have to pick up just any bunch of banana's! No! In my childless state..I fondled those banana's..picking the best of the best..I even partook of a free sample! Of what?  I don't know!..it was free!  AND I didn't have to ask anyone if they wanted to try it..even though I knew that they wouldn't eat it..but they would insist..and then invariably one adventurous kid would put it in their mouth, chew it up, and  immediately spit it out (into a napkin) and hand it to me..because  being the"holder of the soggy napkin" ( and any other wet soggy thing)  somehow became my job. But not today! No, I was free to roam the aisles as I pleased..pushing the cart without "help"..I think I might have even been skipping..until I heard it. That noise that even today-stops me in my tracks-flee or fight?


It was the sound of a child freaking out..losing it...melting down. It was coming from the next aisle. So I went there. There was a woman-mother? Grandmother? Caretaker?  I don't know..but there she was on the floor..next to a little one who was absolutely losing it..there was nothing she could do but wait it out....I made eye contact with her..a kind of a "are you o.k.? do you need any help?" kind of unspoken gesture..She shook her head, and I left her..Of course I could hear the muttering of other people..I could see the eye rolling..sense the thoughts  "What a spoiled brat!"..or "My kids would never.."  You know, the general smugness of the self righteous.

Over the past couple of weeks, two stories have appeared on my feed on Facebook. This and this. .  Both describe the story tellers as wonderful-gods even!  Of course we only get the perspective of the storytellers.  One man went into a Burger King and bought out all of their apple pies to "teach a "bratty" child and his "inattentive" mother a lesson...In the other story, a drunk guy thinks it is a RIOT to fart in the face of another "bratty" boy. And all over the internet-and in the comments, they are hailed as heroes..champions,,.and just oh so funny. They certainly put "those" mothers in their place-oh boy they told "them" Didn't they? The kudos-the glee..It made me sick.  Because the reality...the truth of the matter is.  These men behaved like vile assholes...disgusting mean bullies..Had this happened to me..happened to one of my kids..I would have been broken-smashed, crumbled- because it would have hurt my child even worse..

and the world would have applauded.

It wasn't too long ago when I was that mother..sitting in a store aisle with a kid who couldn't be consoled...Little Bear toothpaste.  Oh how I loathe it.  even today..just the name causes me to shudder a little. I was in the store with a little one..and he wanted that toothpaste..I don't know why he wanted it..don't know where he saw it..until that moment, I didn't even know it existed..There we were..me and my boy. My screaming boy..and all I that could do was sit there-wait it out-keep him safe..I'm sure that we got looks..glares even.. And really-I probably looked unfazed..maybe uncaring..distracted..when in truth I was numb. This was not the first time this had happened-and it wouldn't be the last. Believe me-if the store had carried Little Bear toothpaste-I would have handed it to him gladly..I would have given him a carton-a cornucopia-a plethora-a truckload! if only to get him to stop. Please-stop. .But it wasn't about the toothpaste-not really.  It was about the lights and the noise and the smells-the everything..and he was holding on as hard as he could-and if it meant screaming "Little Bear Toothpaste" over and over..so be it..because I was holding on too..Because we had not slept more than two hours consecutively in the past four years..(I would have sold my soul for one full nights sleep at the time) and he couldn't really talk..and every sight and sound and smell HURT HIM..screaming was all that he could do... and I had to get milk.

At the time, I really didn't care what anyone thought...or really-notice. But now, years later, standing alone in the grocery store-one aisle away from someone who could have been me- I do. I don't know what any of those women"s stories are-including the woman I saw today.  What I do know is that it doesn't matter.It is not my place to judge.  The only thing that I can do is have compassion. Oh If only that were applauded, The world in which I will soon be watching my children venture out in, would be a better place.

I am slowly building up the length of time that I can leave the kids alone at home-so, I didn't spend as much time at the grocery store that I wanted to. I'm still getting used to the idea of leaving them at all. It is a wonderful thing.  I came home today with some beautiful bananas..the house was still standing and the kids were alright..

When mine were small I had one in the stroller and one in my had - when both were fully autistic - and a woman was ahead of me in line. She spoke to the elder even though his language skills were very poor at the time. Waited for me to get my purchases. Followed us out to the car. She never said a word to me, just continued to visit with my son.

Then, once we were there, left.

Earlier this summer the younger walked around a rack of clothes. This one does not respond when called. A woman and her kid that must has seen him said nothing to me when I asked if they had. An older man did and said so. He was behind me in line at check out and I said "Thank you" and he just shrugged like it was nothing.

Those are heroes. People that do what is right solely because it is.

I can never be alone, I have to take the younger BUT, as of last week we are getting a dog guide. It's been 14mths so far and maybe another 6 mths but... :)

I will never forget the first time I left my son home alone for an hour while I went to a fair in the Churchyard across the road with Smiley, and then I got to go to the toilet alone in a shopping centre at the weekend while he minded her! Very special growing up moments. And while he rarely does go to the shops now, the meltdowns no longer happen, he knows what he can cope with and it makes such a difference. May you make many more happy trips alone too xx

I'm screaming YES, YES... to everything you've said here. I still am amazed that I can leave him home alone and not worry. When I was in hospital he even let.himself.in. with his own key!
I LOVE the idea of you and Sam singing that song! And I absolutely despise the mere idea of those dreadful videos.... xx

Thanks so much for sharing - I too have been that mother on the floor with her child and I agree. I didn't even notice if other people were muttering or whatever - I was focused on keeping my child safe.

Now she is old enough that not only can I leave her home, she can 'babysit' her 10 year old sister (okay I admit the 10 year old takes care of herself) I love those grocery trips alone.

@farmwife-I have had some great experiences with strangers helping too. Makes one have faith in humanity. Very exciting about the dog!

@bluesky-those are wonderful moments! I remember all too clearly when I thought nothing like that would ever happen! It's lovely when they take those growing up steps isn't it?

@Jazzy-funny, I feel as if our boys have grown up together. :) I am THRILLED that he has grown so much that he could let himself in while you were laid up! Oh what a joyful relief it must have been..How incredibly wonderful for all of you.

@Dawn-Thanks. I know!..so many of us have been there...and really, at the time-it didn't matter. I just loathe that society revels in these stories of mean people..it hurts me for all the many people who still struggle just to get groceries...I never thought that grocery shopping alone would be such blissful joy..funny how kids change things..:)