~"Experience is one thing you can't get for nothing."~ Oscar Wilde 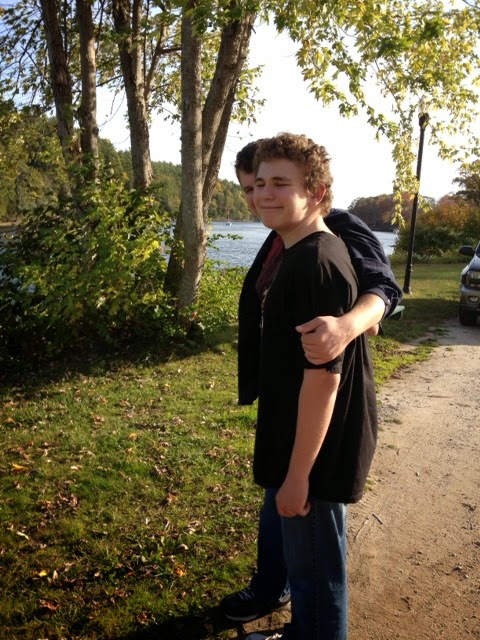 Last night was parent teacher conference night for three of the herd. These things make me so anxious! It isn't that I don't want to meet with teachers..I mean, they spend more time with my kids then I do..So, you would think that I would be just raring to go. Which I am-kind of..but on the other hand-there is still a part of me that feels just ridiculous..Like I am some kind of impostor. As if any minute I am going to be called out "Who is this person pretending to be an adult?"  *sigh* Sometimes... I have a hard time taking my "self" seriously. Unless of course, we are "discussing" my kids..

This past month we have had all of the herd re-evaluated (privately) for occupational therapy and physical therapy. I try and have this testing done by non school professionals-because I think that it can prevent bias.  I mean that in a positive way.  They don't know my kids-so their knowledge of them won't color their observations..or at least it shouldn't. Oh me of stupid faith!  The girls worked with one occupational therapist-who evaluated them, and wrote up the results in a professional non biased way.  The boys?  They worked with someone else. Someone who I believe-thinks they are..perhaps the autism whisperer? Lord save me from the "experts."  Sure, we got the results of the testing-but we also got little nuggets of speculation..pearls of wisdom that she felt confident in giving-because, she had spent at most an entire forty-five minutes with my sons-with absolutely no input other than what was needed to provide an occupational therapy evaluation.

Yes, she felt comfortable suggesting a social group for one boy because he apparently had "no feelings of self worth."  and that he had "difficulty with humor"-although he was "tolerant" of the examiners attempts to make him laugh." It couldn't possibly be that she just wasn't funny..or maybe he wasn't comfortable in  talking about personal things with a stranger could it?  Of course not!  My other son has"difficulty sitting still and on occasion reverts to physical aggression when overwhelmed." What?!  How did she come to that conclusion?! No one said anything about aggression!  As if I'd leave a 5'7" 167 pound young man alone with her if he were "aggressive!" .AND after the testing while he was waiting to be picked up-he paced "Who knows what would have happened if the parent didn't return when they did."(he would have continued pacing) I was also informed that he had "a difficult time understanding the difference between reality and fiction"..But not to worry! They had "a discussion about safety and the difference between an idea and reality"  Holy crap!  How he ever got to be thirteen years old without jumping off of a building or trying to blow up a roadrunner-without her guidance-I'll never know!  Oh Thank you! Thank you occupational therapist/psychology wannabe! I think I feel another "Chicken Soup for the Soul story coming on..perhaps for "know it alls Angels among us."?

Of course, I called to ask her exactly when she had begun smoking crack.

Well, no..I simply asked her "Whose evaluation reports are these? As I have absolutely no idea who these people are." She was not pleased with my query. Could not understand why I thought her input was inappropriate. "Was my son aggressive towards you?" "No." "Did my son say that he did not like himself?" "No."  I asked her what EXACTLY she had based her speculations on-as it was obvious that she had absolutely no idea of the reality of my two boys. That what she had written was a fictional account based on absolutely no input from either my boys or their parents. She really couldn't answer. I informed her that I would be unable to use her evaluations as they presented both of my sons as being other than who they are-and her that her "observations" based on god only knows what- had no place in a professional evaluation. I strongly suggested  that perhaps she might consider rewriting them and omitting the extraneous psychobabble. For some reason she seemed put out.  Maybe she struggles with "self worth"?  If so, I do know a number of social groups she could join.

Sometimes it just feels like you simply can not win when it comes to getting services for your kids. It appears as if you are either asking for too much,or you are delusional and unable to see the "reality" of your child's diagnosis. I can't tell you how many nights that I have tossed and turned-questioning myself.   "Am I not seeing something?""Am I imagining too much?? "Am I blinded by hope?"..and the worst-"Am I too emotional." Because unfortunately, passion, intensity and the absolutely all encompassing love that you have for your kids-can be interpreted as irrational..it's a catch-22, a double edged sword..and it wears you down and wears you out. Sometimes, I just want to stay home-where everyone and everything is our wonderful normal..But I can't.  The outside world calls. Like it or not-I have to go.  Last night it was for parent/teacher conferences..so I went..

I didn't get to touch base with everyone that I wanted to-three kids, too many teachers..But, I saw enough of them to mostly get a handle on how they are all doing. It was a pleasant evening..everything went smoothly...and THANKFULLY, I didn't walk around with coffee stains-in horrible places (that I didn't notice until later) on my shirt..or toilet paper on my shoe...or even worse..underwear coming out of the bottom of my pants.  (Yes, this did happen once. It was clean underwear. That is all I will say about that.) But the nicest most glorious part of the evening were the random comments..the casual stories "Hey, Sam is so funny..the other day he..." and the "I love your (Oscar) boy..you know what he did..." and "Lily is such a good girl..she really cares about doing well." They absolutely made my night. Definitely made wearing my "adult" disguise a bit more comfortable..
Posted by kathleen at 7:00 AM

Labels: autism family humor, independent evals. wacko ot's nice surprises, no roadrunners were harmed in the writing of this blog, parent teacher conferences, trying to do right by your kids, underwear

If nothing else I really loved how you spoke to the 'expert'.... perfect response! Her reports sound totally unusable. Sometimes boys (I had a similar experience this summer) simply don't want to be questioned like that. By a stranger. Especially teenagers. Pity you had to pay for them too....and I totally get why you went for someone outside the school.
I was made feel very small by someone in my boy's school this week too. it made me question what I believe...no, what I KNOW about my son. But I'm not giving in. I'm attending a meeting this week with a different teacher ....and I too am very anxious. xx

Thanks for sharing. I love the way you described the evaluation. I had a similar conversation with an autism specialist at my daughters school when she was in about 7th grade - they didn't feel she was using her hard learned social skills and maybe needed more therapy - I told them all the kids were boring and to leave her alone about it.

@Jazzy-yes-outside of school is always best I think..Sometimes I think that specialists forget that they are dealing with people and not just disabilities..Sam is a 16 year old young man-he certainly isn't going to bare his soul-or share his feelings with a strange woman! The questioning of ourselves is awful isn't it? Glad you are keeping up the fight-hope that it went beautifully for you. :)

@Dawh-HA! I LOVE how you told them..that's great..I hope that they did indeed leave her alone...again, I swear that specialists sometimes
focus solely on the disability...they forget that they are regular kids with feelings and emotions just like anyone else..it gets so frustrating!

All that effort and you get reports based on speculation? That sounds both annoying and upsetting. I wonder did she rewrite them, especially as you were paying her? But so pleased that the parent teacher meetings at least had a very happy ending xx

@bluesky-The actual testing results were there..but she wrote all of this other "stuff" around them-that I felt it would be a disservice to actually hand them in. She rewrote some of it-BUT instead of just rewriting the report and omitting the offensive unnecessary stuff-she just tacked on a piece of paper saying that after speaking with me-I had a different opinion...*sigh*

@Bluesky-it is..sometimes it feels like you just can not win..But-as I did this independent of the school-I do not have to share it..So, that's good...we will just get another one done later in the year. There is no rush-as their services won't be interrupted. I just wanted to get a jump on things..I was just so disappointed in the attitude of the evaluator. She doesn't know my boys- and made speculations based on what she thinks she knows about autism..AND was arrogant about it!