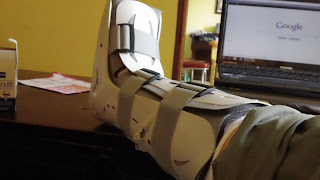 I have an appointment with the doctor next week.  Hopefully I will be done with this cast.  As Sammy so aptly put "I'm getting kind of tired of your broken foot" sigh... Necessity is a mother...on so many levels....just don't feed her potato chips.
Posted by kathleen at 5:29 PM 9 comments: