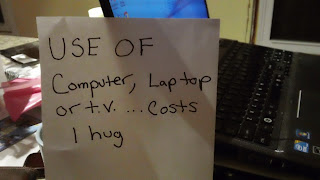 "Mama?"..Yeah?"..."Can I go on the computer?".."Well you have to pay me first..." Sometimes-whoever is asking, will reach into their pocket and pretend to pull out money.."I don't see any money".."MAMA!".."Well, I don't.." "But I don't HAVE any money!".."Well then how are you gonna pay me?" "Can I give you a hug?".."Now THAT works for me."  You would think they would know by now..especially as both Omar and myself have been demanding "payment" since...well....forever.  Hey-it isn't like we're asking them to clean the bathroom or anything...It's just that sometimes..sometimes it just feels like days slip by..always so full of whatever needs to be done..that I just want to take a moment..a second to stop and just hug my kids.  If I occasionally have to manipulate the situation in order to get one-so be it. Don't get me wrong, it isn't that my kids aren't affectionate-they are. I do get plenty of unprompted hugs.   It's just that they are growing up way too fast (or at least it feels that way-although there are days when it doesn't feel fast enough)-and I know that there will be a time when  getting hugs won't be so easy. So I'm grabbing as many as I can while the gettings good. It is kind of like hoarding-only prettier (no trash or dead animals).
Just a few short years ago, Sam declared that he wouldn't go to college without his brother, their bunk bed, and his toy castles.  Now he talks about moving to California, making movies and sometimes (depending on the day)...putting me in a home so that he can "do whatever he wants". "You want to put me in a home?"..."Yup".."Well wouldn't you miss me?" "I can always visit." Go to admit-there are days when that actually sounds kind of...relaxing.  Well..as long as it was a nice home..with perhaps an ocean view, unlimited coffee and good books to read..But I digress...The thing of it is-the older my kids get-the faster they seem to grow. Does that make sense?  In the baby years-I thought that the only thing getting older was..well, me. I felt as if I were living in an endless cycle of filling juice cups, changing diapers, getting snacks and looking for the t.v. remote-(Sisyphus-mother style) ..I never imagined (I was too tired) that there would be a day when none of that would be necessary.( Except for finding the remote-THAT is still an issue.)  So I am trying to make every moment count-while at the same time encouraging them to move out grow up.  The only one really having trouble with this is Oscar.
Oscar hates loathes doesn't really care for change. Unfortunately, the last two years have been over full of it.  My boy has always had more than his fair share of anxiety,way more- and we have always tried to work our way around it.  Finding things to lessen it-make sure he had some breathing room. But lately..lately it seems that all he does is try to hold himself together-almost to the exclusion of anything else.Trying to find solace in whatever he can to keep himself together.  Stimming, pacing...even the dreaded "Thomas the Tank engine" -something I hoped had thought we were well rid of years ago. I remember back then-when he watched it obsessively..it was all Thomas ALL the time..if he wasn't watching-he was carrying (or flushing down the toilet) one of the trains-or looking at the books.(to this day-I still know all the words to all the songs)  I had asked him once "Why Thomas? Why all the time??!!" "WHY?" and he simply said "They have no worries." They have no worries...*sigh*  my boy is FULL of worry. He isn't ready for his brother to talk about leaving home (even if it is years away) he's not ready to deal with moving to the middle school next year, he's not ready to deal with adolescence-because in his head-growing up means leaving home-and he is just not ready for that(even though we explain that he doesn't ever have to leave-but that he may WANT to-and that this decision is years and years away).  But too him-his constants no longer feel constant and he is afraid. So the best we can do (for right this moment) is to muddle on through..and give him as much love and support as we can. I KNOW that he will get through this..it's watching him do it that hurts.*sigh* Sometimes this part of parenting(the watching kind)  can just...well...suck.  Is it a wonder that I try to grab/give as much affection as I can?
I have to say though-even with all of his worries..Oscar never loses his sense of humor. The other night, I was walking past the bathroom as he was clipping his nails. "Hey Mama"..."Hey bud.." "Can I go on the computer?".."Well you can if you pay me." he walked out of the bathroom (I thought to give me a hug) and said  "Sure. Here you go."..he opened my hand and put his nail clippings in it...laughed and walked away.
Posted by kathleen at 7:00 AM 14 comments: