I hate autism awareness month. There-I said it. I think it's stupid..and that it serves no purpose-other than to raise money for certain organizations..blah blah blah...I've written about it before..So, this year, I thought that I would ignore it all together..I was just going to skip April. forget about it....keep my head down and my eyes closed-and hope that May came quickly...if only it were that easy..You see, April had other plans for me..

At the end of March, I was invited by another writer to read/submit a of piece of mine for a project that they were putting together.  I was hesitant..I am not always confident in my writing (no! Not fishing for compliments here-or any comments!) Anyway-I decided "what the heck..why not?"..I had nothing to lose except my dignity..so I did it....I picked a piece that meant something to me..I read it with everything I had...and proceeded to fall flat on my face.  Holy crap it was awful! I'm not going to go into details but..I worked for a few years as an actress..I have had my fair share of rejection..you get used to it,,,But this? This was ten million times more awful..because I wasn't playing a character..these were my words..my life...and it was (sob) rejected. Oh the humanity!..What had I done wrong?! Wasn't I funny? Bittersweet? Soulful enough?! What was wrong with my words?! My wording?! Were my feelings not feely enough?.I licked my very big gaping wounds...and limped on...But it did make me think...reevaluate...look at what I was writing..what I was saying..and more importantly- how I was saying it....and in my time of reflection- came to realize that I am *sigh* never going to be the Maya Angelou(or any other passionate female writer) of parent/autism/family bloggers..never going to be able to eloquently beat my breast ..howl at the moon..or gnash my teeth... I simply don't have the angst..(or cup size) required, At least not when it comes to my kids....and I think I'm o.k. with that..

That is how I spent much of April..in soulful reflection and being the best darn cashier I could be at my new job! Which let me tell you-has been eye opening! I have seen things...things that,,well, it will take a whole other blog post. .. I thought that I was going to slip quietly into May...until we got some disturbing literature in the mail..

Omar and I are both in our fifties. (It isn't a big deal to us..Coming from N.Y., it was normal to wait to have kids until your thirties...Here, we are the age of most grandparents. I find it amusing. Sometimes unsettling...it is kind of weird to go to school functions where most of the other parents are young enough to be your kids)..Since we were both around forty, we started receiving literature from AARP. We thought that it was funny. However, a decade later...it is starting to get kind of scary,,,Now, instead of every few months...we are getting letters every few weeks...insisting we join...insisting we take advantage of the benefits,,one of which included this- 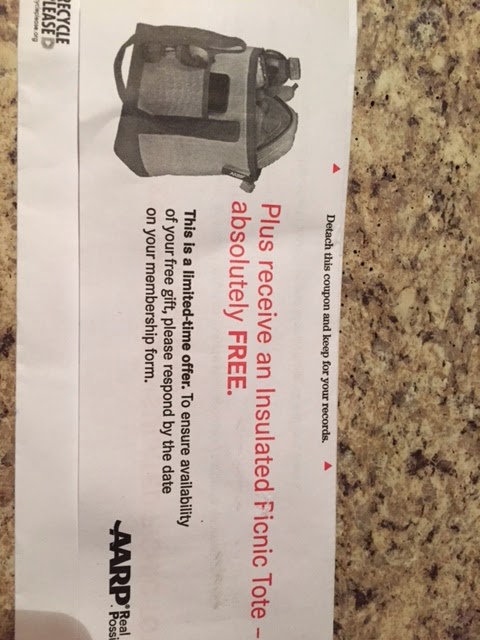 I don't think that I have ever seen Omar so appalled! "Could you see me carrying this?!" he yelled indignantly..."*snicker* No...hahahaha..".."Why are you laughing?" "I'm trying to imagine you carrying a "tote"..".."Why would they think I would want this? "I don't know."  Are they telling me to just give up?  Do they think my life is over?  Why not just send me a coffin? Or a coffin discount?" .."Well.. maybe you'll be cremated and I can carry you in your tote."  Which of course just made me laugh harder...

Thankfully, April is almost over. I seem to be back to the business of blogging...and all seems to be steady in our world....until September that is.. I'll have to let Omar know that it is "Senior citizen center" awareness month....I'll tell him to bring his tote...
.
Posted by kathleen at 7:00 AM 3 comments: