~"I think she is growing up, and so begins to dream dreams, and have hopes and fears and fidgets, without knowing why or being able to explain them"~ Louisa May Alcott, Little Women 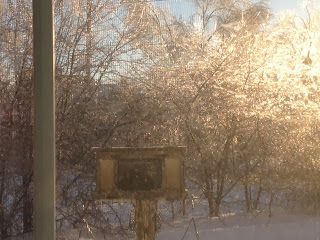 "Mama?" I can read minds you know"..Oscar announced the other day "I know what you're thinking." "Oh really" I said."Yes-you are thinking that you want me to be in the world more." He looked so sad. "No, I'm actually thinking that I bought you new snow pants today..but yeah, I guess that I do want you in the world more..I need to know that you can take care of yourself when you are an adult." Being the master conversation changer that he is, he announced "I'm a misfit!" To which I replied."Nobody wants a Charlie in the box!" -.figuring that  this was just Oscar playing the game we usually play-quoting movie lines.(this time Rudolph the Red Nosed Reindeer.) "No", he said, placing his hand on my arm.."I really am a misfit." I just looked at him...I mean, what do you say to that? "It's o.k. because misfit just means that I am different." He was so earnest. "It is o.k. to be different." he added-as if to reassure me. "Yes, it is o.k. to be different-wonderful even...but it's hard too." "I know." The clarity of that moment screamed to me as to just how aware of the world that he is. This is his truth.

It has not been an easy year for my boy. Puberty and all it's funky hormonal changes has reared it's ugly ugly head-and I think that for the first time ever-Oscar has begun to realize that he is indeed, like it or not, growing up.  That he will one day be an adult... Part of him hates the thought of any kind of change-but another part sees all the changes going on around him.  His brother Sam, two years older is chomping at the bit-longing to leave home..he wants to do so much-he talks of all of his plans and the adventures waiting to be had. And Lily-just two years younger..clings to her childhood..while tentatively taking baby steps into young woman hood. He is caught in the middle-and he does not know what to do with himself. Part of him accepts the change-but a bigger part wants things to remain the same. He is restless and melancholy..not fitting in his skin- a storm waiting to happen.

I was talking to a good friend about him over Thanksgiving-and she said "I worry that he will be lonely." Oh how that pierced my heart. My boy-who is so much more than anyone knows-or can know-or takes the time to know..a person who just wants to make people laugh..whose self proclaimed talent is "watching YouTube videos" This great being-so filled with compassion and empathy for others...that he might one day be lonely-breaks me. It tears me into a million pieces. But then I wonder-is my definition of lonely- Oscars definition? Is what he needs-and what I think that he needs- two entirely different things?

I look at this almost young man of mine-who is so very capable,( but many times simply chooses not to be-and gets away with it because of the nature of his disability) and I wonder.  Yes, he can read, he can do math...but finds reliving videos in his head much more entertaining. And really, can you blame him?  Multiplication or YouTube Poops? What would you find more interesting? I don't know what to do-or how to help him. Do I trust that he will get to where he needs to go in his own time?  Or do I fret and worry that if we continue along this path-he is destined to a lonely life? Sometimes I hate being a parent. I have raised him (all of my kids actually) to be who he is-and yet, sometimes I spend too much time internally worrying about who he is not. It's maddening! I have to let go and trust in him-even as he tenaciously holds on to the world in his head.(because it is less frightening than the world out of it). How do I make the world outside of his head more palatable? How do I make him understand that there are things he needs to be able to do in order to live independently (as possible) while at the same time preserving the beauty that is him?

Sometimes I really do wish that Oscar could read my mind. If only so that it would reassure him that I think he's wonderful.That he is enough  Deep down, I think that I know that he will be o.k....sigh...  We just need to get him over..through..around this puberty hurdle...let him settle, in his own way and time into becoming who he is...and in the meantime- do some detailed research into careers in YouTube viewing.

A mixture of both but a push to cut the strings.

Mine, I truly thought by now would be a teenager. Well, he is and he likes it but at the same time it's obvious he does not understand that 18 is coming. With him it's Mario games. But we started at mild non-verbal autism and normal-ish really didn't come until age 11 and now we're 14 and our frame of reference is pretty much 11+. It's like we missed childhood and he does not remember it.

So, even though he's in the academic stream (Univ) in Gr 9, we put him in Resource class next term and plan to continue it every year. There, he can learn school survival skills - it's what they teach. There, the ASD itinerant teacher can add all those social things that have been missed - my list is huge, the meeting is in 3 wks again and resource is next semester.

He works on the farm and started last summer - a little hoeing and Sat in harvest. He went to camp for a week on his own last summer and goes again for Mar break and next summer. He's doing his volunteer hours.

You might have a fight on your hands for that You Tube video watching career you know. Then again, your boy can take the US role, mine will take the European one ;-)They can do the same with the 'making people laugh' career!

I think your Oscar knows just how much you think of and love him.

I don't know what to advise,but anyone who can make other people laugh is surely going to have a wonderful life, especially with a loving family behind him xx